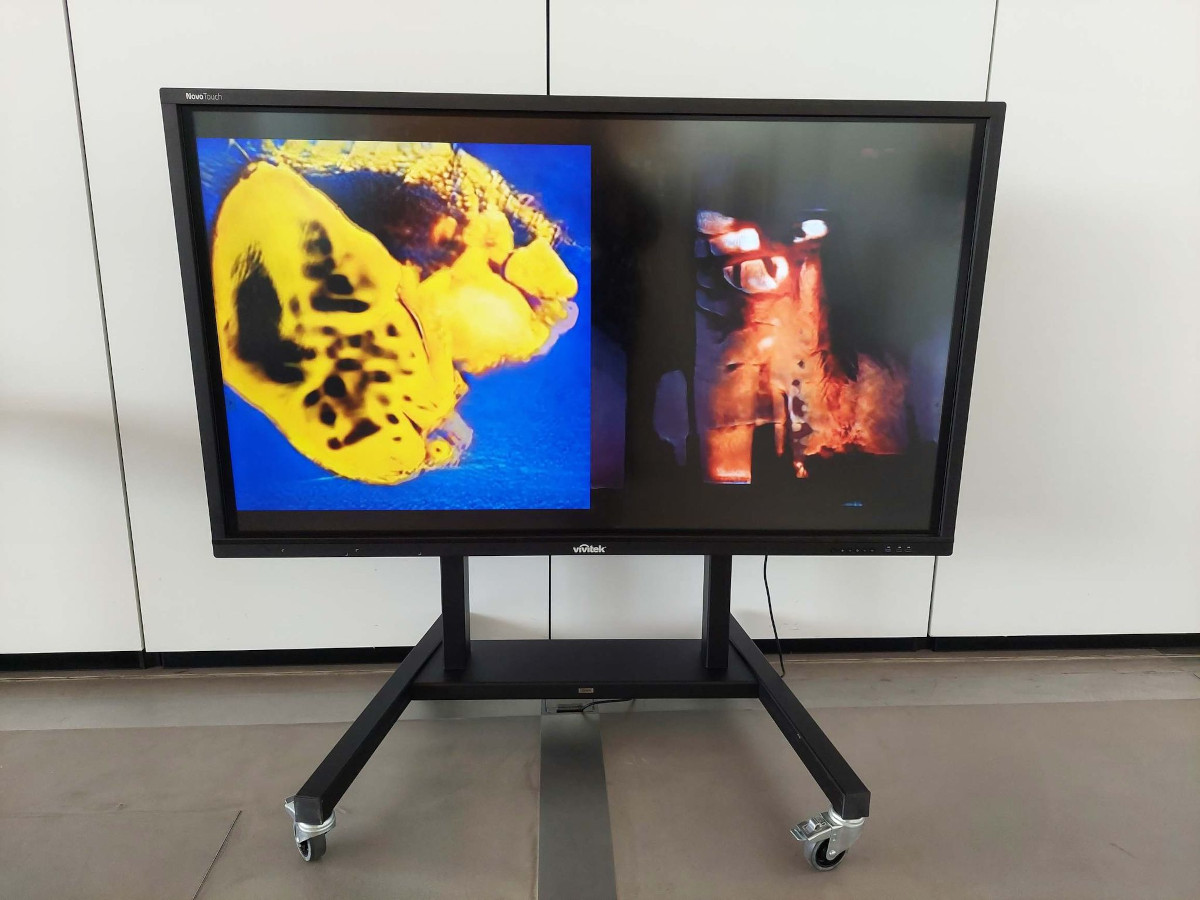 “Ecocide is human activity that violates the principles of environmental justice, as by substantially damaging or destroying ecosystems or by harming the health and well-being of a species.” By overexploiting our planet we not only endanger human survival, we endanger humanity as such. The name #BurnEcocide emphasizes that destruction of nature is destruction of the part of human life. The artwork constitutes of an animated graphic artwork in a narrative of nature disappearing. It talks about the high sea's ice melting due to global warming and its impact. Global warming affects the ice melting in the high seas that is the home of ice algae, the main food source of Antarctic krill. Antarctic krill, in its turn, is the main food source for the Humpback whales. By fertilizing the algae whales play a vital role in the marine ecosystem. They help provide at least half of the oxygen we breathe. The whole delicate balance is disturbed, and it's time to recognize that healthy ecosystem are vital for healthy humankind.

Anna Muchenikova (Anna Mu) is a visual artist, originally from St. Petersburg, Russia, based in Helsinki, Finland, since 2010. Anna graduated in 2014 from Aalto University School of Arts, Design and Architecture Graphic Design MA, and before that did her bachelor in graphic design at St. Petersburg State University. Anna is creating detailed worlds of magic and melancholy in black ink by mixing Art Nouveau, Japanese woodcut influences with Nordic nature inspiration across themes of introspection, female identification, and nature. Her method is mainly hand drawing but she is also using animation.

Images of abandoned fur farms and pig raising facilities in Kristo Muurimaa’s series Re/covered connect to festival’s theme by depicting societal and ethical change, while they also tackle the change that takes place on an individual level. The efficient and technologized, yet old-fashionably cruel, reality of animal agriculture is still tangible in photographs of desolated animal-industrial complexes. A the same time, the images bring hope that recovering, and other kinds of futures, are conceivable.

Kristo Muurimaa has worked as an investigator since 2006. While he (according to himself) may not know much about framing a shot and can't seem to get the exposure right, he'll stubbornly wade through snow, swamps and manure to get to photograph the dark corners of our relationship with animals. His images of the “monster foxes” on fur farms have been published widely in international media. Muurimaa is also the author of Animal Factories, a photobook on the relationship between humans and non-human animals.

How we learn from what AI learns from us?
From the propaganda during the Cold War to fake news dissemination in social media, visual images are manipulated by not only the political system but you and me. Nowadays, social media shape the public’s cognition, and AI plays a critical role as an agency of the governor’s authority to monitor users’ data transaction, especially in a totalitarian regime. As the discussion around the origin of COVID-19 shows, the ideological confrontation between two major camps, China and the US, has never ended. Ideological war of GAN is an art project that tries to speculate how AI trained by different ideological image source may affect the result of the audiences’ collective image annotation. GAN used in my work has had a large amount (hundreds to tens of thousands) of images as the source of training data from the beginning, and through long-term model training, countless new images with a similar original style are produced.

“A generative adversarial network (GAN) is a class of machine learning. Two neural networks contest with each other in a game (in the form of a zero-sum game, where one agent's gain is another agent's loss). Given a training set, this technique learns to generate new data with the same statistics as the training set. For example, a GAN trained on photographs can generate new photographs that look at least superficially authentic to human observers, having many realistic characteristics.” Wikipedia

“How do you dare to think we human beings are superior to AI? Eventually, we’re all brainwashed by one ideology at some extent, aren’t we?”

Tyler Liu
The complex historical background as a Taiwanese brought me extreme interests of exploring the difference of information communication between the so-called western democratic values and the Socialism with Chinese Characteristics. I identify myself as a media activist working with AI to create reflective culture jamming images. I have passion for exploring and developing creative strategies & methods for socially-engaged campaigns to raise the awareness of the public (especially reflecting on the ubiquitous censorship controlled by the combination of human-machine collectives behind the screen). I am intrigued by the question: how could human beings teach AI to look and think critically/ ethically? Or put it another way, could AI-generated images “teach” humans how to think and evoke a dialogue between the conflict ideologies?

The “Buujukat” is an architect of our refuse. He rummages through our inner lives through the traces of what is left. It is a person of a creative intelligence who reconstructs a discarded material destined for death. In giving life, rather, survival, the “Buujukat” reintroduces our trash to the mouth of our good conscious and terrifies our society of consumption that throws away everything. Trash is gold for our “Buujukat”. With an anvil between his hands, he transforms our waste and proposes something new.

Babacar Traore
I was born on Rue 1, not far from Kussum Beach in Médina, the first “quartier noir” of Dakar, formed at the dawn of World War I. The electrical posts and wires, television antennas on rooftops, colonial houses still in good condition, or those residences in a state of advanced decrepitude, vestiges of a recent history, the diversity of colors, nationalities, the rural in the urban; this disorder in order, this chaotic cohabitation, constitutes the primary material of my work. I consider myself a photographer of my neighborhood, and my neighborhood, the world. I use photography to archive moments of my daily life and to define my time, my era, for the generations present and future. I live and work in Dakar.