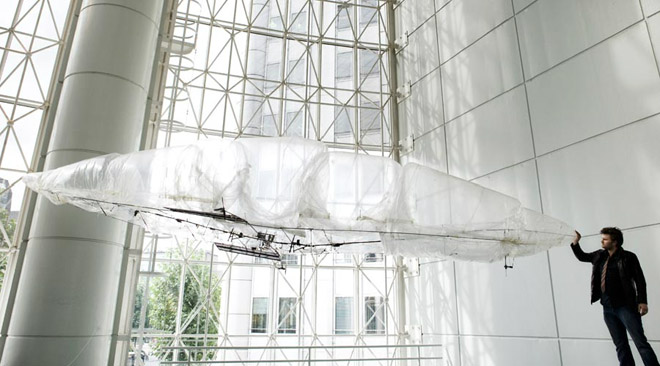 Utopian airship Aeromodeller2
02 August 2011, Juha Huuskonen
One of the guests of both Pixelache and Mal au Pixel festivals this spring was Lieven Standaert, one of the members of Timelab (Ghent). In our festivals he presented Timelab's Mini-CNC Kit project but he is also working on an ambitious project called Aeromodeller2. It's a prototype for a '90-meter, zero-emission airship that will never need to land to get its fuel, creating hydrogen from the elements it encounters and briefly anchoring when it needs to replenish its energy in a renewable way'.

Régine Debatty of WMMNA recently did an extensive interview of Lieven. In addition to explaining the Aeromodeller2 project, Lieven also reflects on his own role as an artist/innovator/designer/architect and the difference between open exploration vs commercially motivated innovation.