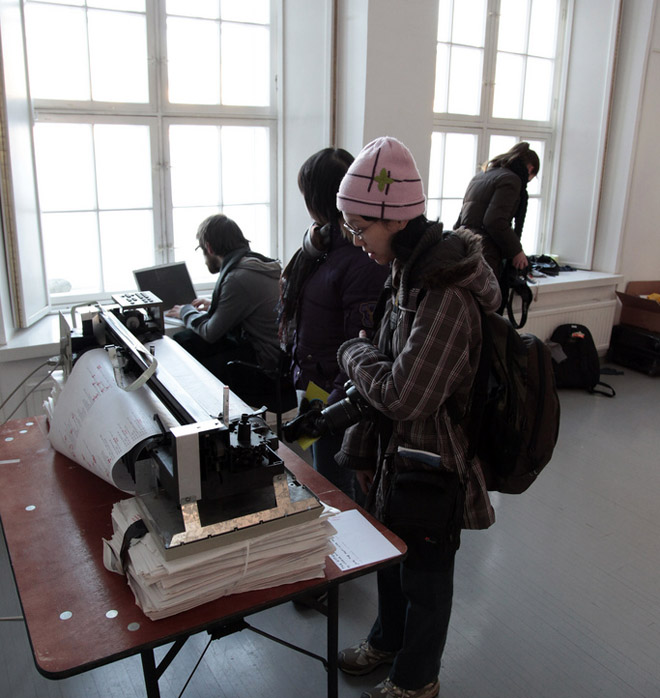 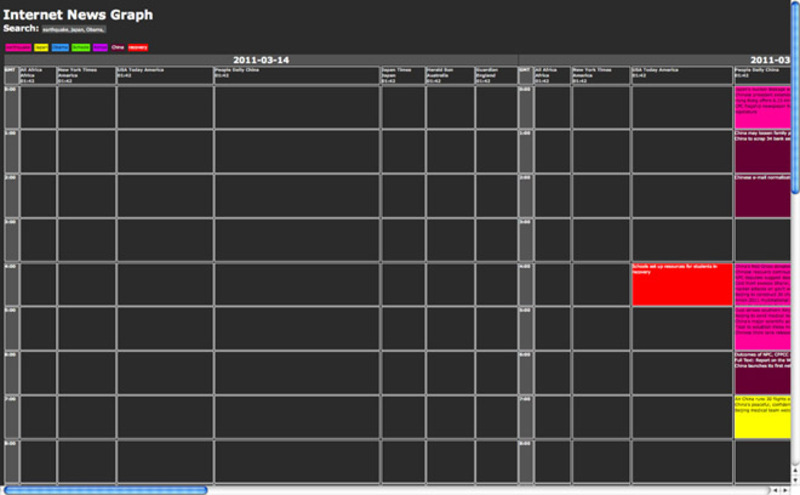 The Listener is a multi-person chatting program. The conversations are mediated by a "third person", a computer script that adds, subtracts and replaces words to deliberately create discrepancies in what is shown, and understood by the users. Every chatter sees their own unaltered version of the transcript, but every other person sees a transformed version.

As these subtle changes are secretly operated on a secure server, a large plotter instantly prints out the complete transcript with both original and altered versions, shedding light on the inner workings steering The
Listener's behavior and creating an eternal, physical artifact to embody these fragile, ephemeral variations.

If the assertion that text and reader implode to create a 'new' third thing (often called meaning, or subjectivity) holds true when one reads a text, then it is this new creation we are trying to address. By slipping itself between the textual exchange, The Listener shifts the conversation slightly by altering certain words and sentences. In most cases, confusion ensues and new trajectories are followed by the participants, depending on
the level of alteration (ranging from none to extreme).

When a user sends a message to the other ones, he or she sees the original text but the others see the altered version. This technique of showing/concealing is a sneaky strategy meant to underline the subtle inner workings of computer programs when mediating the information we consume.

Finally, The Listener is meant to highlight the effect that tools have during textual production. The materiality they afford, the efficiency they offer and they limitations they impose on us are both inevitable and
non-trivial in the expression of our ideas.

The project is an interactive graph that focuses on four different newspapers from four different continents. The graph collects headlines of each newspaper and places them within the graph according to the time and date that they are released. In this way you are able to see the exact time that headlines are being published and the delay some newspapers have according to others. The graph also allows you to search for particular words, the words are then highlighted thereby giving you a visual image of the published time of each newspaper and the amount of headlines that are being written about your particular word search. This project gives its viewers a understanding of what the newspapers of each continent are more focused on, how long it takes the newspapers to publish and allows you to read the same articles in four different view points. The reason I made this graph is because I wanted to show a different way of perceiving and viewing the vast quantities of information the Internet is giving us. 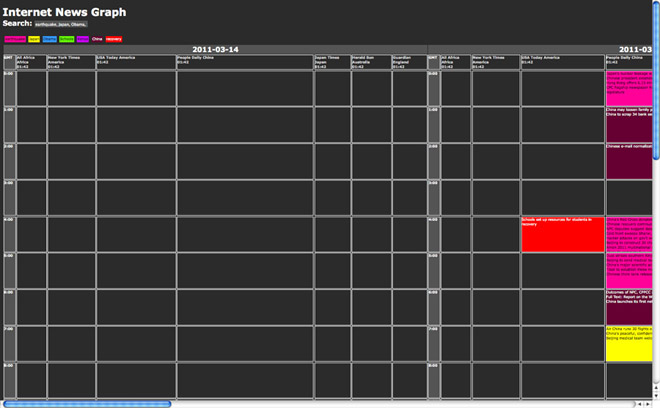