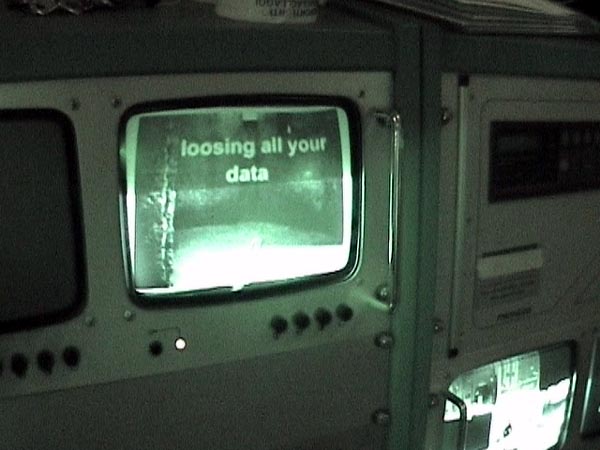 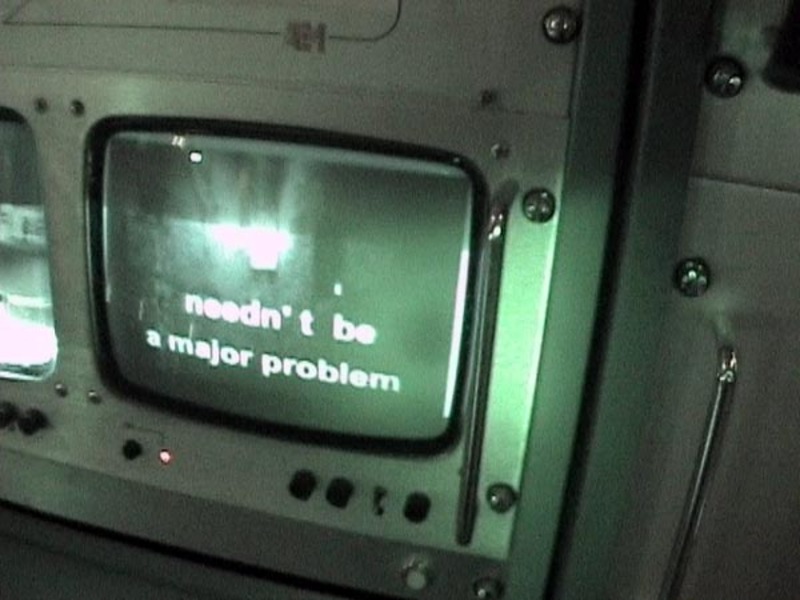 Some more or less nostalgic memories from year 2001:

In May 2001 I participated an event called D.I.N.A (Digital Is Not Analog) in Bologna, Italy. The event had been announced just a few of days before it took place, probably because the organisers didn't actually want to attract too much audience, due to a very unusual lineup of presenters. Many of them had never revealed their real identities, they had only become known via their websites and alias names.

The 'person' I was most curious to meet was Netochka Nezvanova. 'Netochka Nezvanova' is Russian and means 'nameless nobody', a title and the main character of an unfinished novel by Fyodor Dostoyevsky. The writings of the online Netochka gave an impression that she was one female person – even though it was quite certain that there were more than one person involved in her projects.

Netochka was famous/infamous for sending a huge quantity of emails to many international lists, using her own cryptic language. The postings were a mix of shameless self-promotion (for herself and her nato.0+55+3d software), philosophical ramblings and provocative comments about some well-known individuals in the net culture scene. Some of her websites were eusocial.com, membank.org and m9ndfukc.com, and her writings gave an impression that she had her own anarchistic wordview and political agenda, but it was impossible to figure out what it was. Here is a small sample:

When it was Netochka's turn to give a presentation, she sat down on a chair and placed some living snails on her gray dress. She continued by reading a poem and meanwhile the snails 'drew' an abstract 'painting' on her dress.

Another invited presenter was Ricardo Domingues, one of the members of Electronic Disturbance Theatre. Ricardo gave a presentation about Virtual Sit-Ins, a method for organising online protests. The participants of a virtual sit-in would download an application that would send a large amount of requests to a certain website, eventually causing it to crash.

Ricardo also told about the Zapatista Air Force. The Chiapas government had been spreading a false rumour that the Zapatistas were planning 'new acts of violence'. This rumour was used as an excuse to increase the governments' military force in Lacandon jungle where the Zapatista army was supposedly hiding.

The local people responded by organising a demonstration, or rather an act of political theatre, by throwing paper planes over the fence of the military camp. They wanted to break the 'sound barrier' which the government had established between them and the soldiers. One of the messages said "Soldiers, we know that poverty has made you sell your lives and souls. I also am poor, as are millions. But you are worse off, for defending our exploiter".

Inspired by this event, the Electronic Disturbance Theater released a software called “Zapatista Tribal Port Scan” which would repeatedly send a poem about the Zapatista struggle for peace to government's servers, through the “barbed wire” of internet.

I also met 'Hank' and 'Andy' from RTMark (now better known as The Yes Men) – they gave a presentation about their WTO impersonation in Salzburg, Austria and later in the evening told me that they had just been invited to a conference about the future of textile industry in Tampere, Finland.

The Yes Men had received the invitations because they had created a face WTO website in address GATT.org (WTO used to be called GATT). WTO had tried various different ways to bring the site down but without success, on the contrary they had just helped in making things worse for them – the hostile press-releases of WTO has tremendously helped in gaining attention to gatt.org.

In 2001, the term 'tactical media' was often associated with Internet – it was a powerful tool for grassroot organisations, a channel to gain momentum around important political issues which were neglected by the mainstream media. There was excitement about Indymedia – a software that enabled anyone to easily post news online. Indymedia had been one of the main tools for making the recent anti-WTO more visible and organised.

In 2001, there was a more or less clear division in the net: corporate sites had a slick design but were extremely boring in content, all the interesting social action was taking place on the non-profit side of the net. This was the time when activists were using tools made by other activists and there seemed to be an immense potential in this collaboration. Or in other words: it seemed unlikely that anyone could stop the development of grassroot media and organising.

The downward spiral of tactical media story starts from August 2001, from the Genoa anti-WTO demonstrations.

The Yes Men participated in the event – their plan was to give out a thousand small mirrors to demonstrators which they could turn towards the police, to let them see their own misuse of power.

On the second day, an Italian activist called Carlo Giuliani was shot dead by the police. This did not calm down the situation - the violent clashes between demonstrators and police continued the following day. In the evening, a group of policemen went to seek for revenge. Their target was the Indymedia center. Hank and Andy had checked their e-emails there and left to sleep on the beach just a few moments before the police entered the building.

After destroying some media material they found there, they moved on to the next building, the Armando Diaz school where several hundred activists were staying. They started randomly beating up people, some of whom did not even have a chance to get out of their sleeping bags. Two people nearly died and 61 required hospitalization.

The twin towers were a target of a terrorist attack and the events that followed made it clear that Western leaders were committed to ignore the public opinion. The era of 'war on terror' and disgusting misuse of military power started. It was all like from a bad fiction novel – it was very sad that happening for real.

Meanwhile, the term 'Web 2.0' emerged and companies started to build business models around online publishing. The social media revolution finally arrived – with the bad video quality of Youtube and the uggly web design templates of Myspace.

It is actually amazing that 'tactical media' has survived in the net that is dominated by platforms set up by commercial companies – Twitter, Google, Facebook et al. The companies have maintained a surprisingly good track record with supporting freedom of speech – it has been far from perfect, but it could have been much worse.

Before jumping to year 2011, we need to stop in year 2008, the main peak of the current global financial crisis (so far).

There definitely is a connection between the anti-WTO protests in year 2001 and the current financial crisis. People protested against the free market ideology and the way important political deals were done behind closed doors and police barricades. The protests did not have much of an impact to these issues but now the system is crashing on its own.

In my knowledge the connection between the protests and the crash has not been discussed in mainstream media, or practically in any media – or maybe i'm just following the wrong media sources. The only comment that I've come across about this issue is from the psychoanalyst-philosopher-provocateur Slavoj Žižek (from an interview in Finnish Voima magazine in early 2009):

"The only surprising thing about the economic crisis in 2008 was how easily people accepted the view that the crisis appeared out of the blue. Don't we remember the demonstrations that followed the IMF and World Bank meetings during the first decade of this millenium? The demonstrators were not only concerned with common critical views towards globalisation (the increased explotation of Third World countries, bla bla bla). The demonstrators were criticising the way banks had created an illusion of growth by playing with imaginary money: the result would be a catastrophy.". . .

. . .“In year 2004 the amount of demonstrators who wanted to warn about a financial crash had grown so great that in Washington that 8000 policemen were ordered on the streets in Washington and 6000 extra policemen were ordered from Maryland and Virginia. What followed was tear gas, muggings and mass arrests, to such an extent that police had to start using busses. The message was clear: the police was literally used to silence the truth”.

And then finally, we arrive in the end of year 2010 – the return of old-school tactical media in form of Wikileaks and the denial of service attacks by Anonymous.

The tactical media tools and methods in 2001 and 2010 were pretty much the same, based on the basic properties of the net. Anyone can put information online and it can be endlessly copied. Also, any server can be told to send out thousands or millions of requests, turning it into a data weapon towards an unexpected target.

In December 2010, John Naughton wrote in The Guardian, in an article titled “Live with the WikiLeakable world or shut down the net. It's your choice”:

“The most obvious lesson is that it represents the first really sustained confrontation between the established order and the culture of the internet. There have been skirmishes before, but this is the real thing.” . . .

. . . "One thing that might explain the official hysteria about the revelations is the way they expose how political elites in western democracies have been deceiving their electorates. The leaks make it abundantly clear not just that the US-Anglo-European adventure in Afghanistan is doomed but, more important, that the American, British and other Nato governments privately admit that too. The problem is that they cannot face their electorates – who also happen to be the taxpayers funding this folly – and tell them this." . . .

. . . “What WikiLeaks is really exposing is the extent to which the western democratic system has been hollowed out. In the last decade its political elites have been shown to be incompetent (Ireland, the US and UK in not regulating banks); corrupt (all governments in relation to the arms trade); or recklessly militaristic (the US and UK in Iraq). And yet nowhere have they been called to account in any effective way. Instead they have obfuscated, lied or blustered their way through. And when, finally, the veil of secrecy is lifted, their reflex reaction is to kill the messenger.”

This article was written in the moment when the Wikileaks media circus was at its peak. It was a moment when it seemed that politics would need to change – that it would need to take into account the immense power of information transparency offered by the net (either voluntary or forced transparency in the form of leaked information). The response by political organisations could be either more transparency or even more efficient secrecy – or probably both, in various different forms.

A month later, in January 2011 – the mainstream media attention towards Wikileaks has almost completely disappeared (and recently it was mostly centered around speculations about mr Assange's sexual behaviour, anyway).

Maybe the facts don't matter that much - maybe the political theatre will not have to change its rules after all:

'The aide said that guys like me were "in what we call the reality-based community," which he defined as people who "believe that solutions emerge from your judicious study of discernible reality." ... "That's not the way the world really works anymore," he continued. "We're an empire now, and when we act, we create our own reality. And while you're studying that reality—judiciously, as you will—we'll act again, creating other new realities, which you can study too, and that's how things will sort out. We're history's actors…and you, all of you, will be left to just study what we do.'

From Faith, Certainty and the Presidency of George W. Bush article by By RON SUSKIND 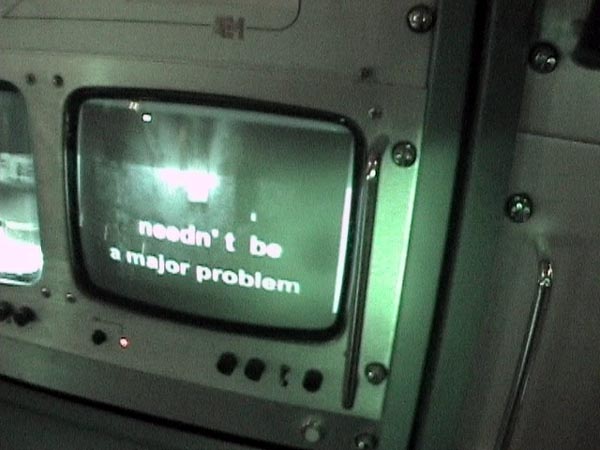