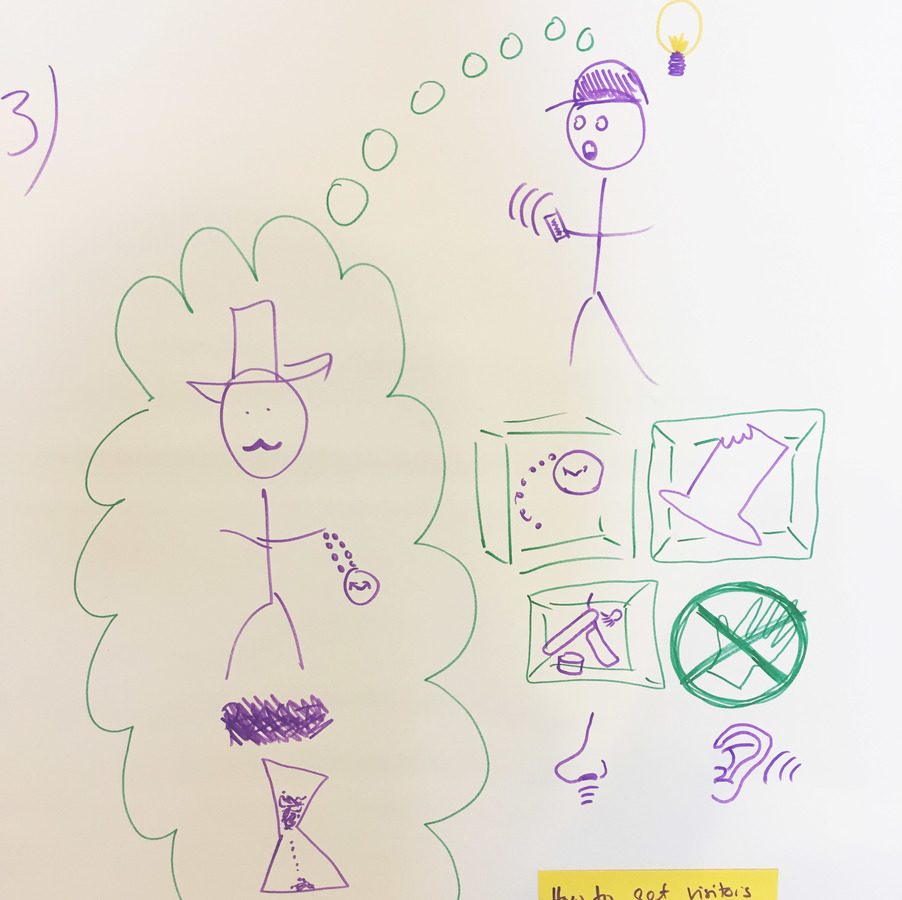 Finnish Museum Association organized Creative Museum workshop in Helsinki on 2nd of June, 2017. The workshop functioned as a testing ground for originally French event concept called Museomix. The basic idea behind the event is to mix all kinds of creators with museum people, in order to create new projects, like apps, concepts or games for museums, on the spot. In Helsinki the event lasted only for one day, so we focused on conceptual frameworks. The participating museums included HAM, Fiskars museum, Museum of Technology, Turku Museum Center and National Museum. Non-museum people represented Vaasa Hacklab, Aalto University, Metropolia, Eksote and Pixelache among others. Ill focus on this report only on the workshop sessions, which tested the museomix concept, although the day included also presentations and visit to the media art exhibition at the Museum of Tehnology.

First we got divided into groups, which consisted both “museum people” and “non-museum people”( NMP) as we were described. Each group shared questions and collected answers on a flip board. After each session we shared our conclusions with other groups. The first session was titled "Connecting to Communities". We, the non-museum people described which kind of user communities we belonged to, and what different kinds of expectations we had. I, for example, would evaluate my experience according to the treatment of artists, women and environmental values. We were also asked how museums could be relevant for us and reach us. We had a bit of discussion about collaborations between freelancers and museum professionals. We learned that it is important to remember that the curating cycles tend to go in 2-3- year cycles. If you want to do something in a museum in 2020, start now. It is also important to share knowledges of the boundaries and technologies of each partner. For example, it´s not possible to bring certain materials, like wood, inside Turku Castle, without special treatments, like freezing. This kind of information might change ideas for project proposals.

The second session focused on "Spaces for Yes", meaning “wild” spaces, where non-museum people can get involved freely. My group chose Fiskars museum as our case study, and found out they have free space in their office. Why not offer a desk for a short artist residence? Perhaps they could have monthly resident artists sitting at their office working on their own work or perhaps working for the museum. They also had a garden, where exciting things could happen. We, the NMP, asked if it was possible to invade their spaces, in order to install specific location-based works, on corridors, floors, corners, which are not used for regular exhibitions. That option might also be possible, although it created some doubts, too. I brought up the issue of virtual space, as when we talked of space, everyone seemed to think of an empty room. Many small museums could expand into virtual space, with i.e. audio guides.

In the third session we focused on "Strategies for Success", from ideas to collaboration. During this session we started to develop concepts for museum experiences. My group continued with Fiskars museum and we started to brainstorm about an exhibition that would attract female audience, considering that Fiskars is a history museum for steelworks. Another theme was iron itself as material-how to give visitors hands-on experience on the metal that carries the biggest share of the weight of our planet? After an intense 15 min brainstorm, we came up with a concept for an iron concert, in order to bring back the Fiskars soundscape, where the sound of forging iron used to play a major part. Other groups came up with ideas such as Museum membership for freelancers and 24h projection on the new Kuopio Museum building.

The great news for NMP is that the museums seemed very keen to have more artists and makers involved in the museum programs. They are waiting for proposals. Museomix serves as a great opportunity for networking and meeting possible collaborators. On the other hand, I also sensed worry from the part of NMP about the possibility of being exploited. For the museum people the museomix offered fresh innovation and brainstorming out of the box ideas, which could come handy at work. What if the ideas the freelancers throw on the table for free are being used in the future without their consent or payment? How would that benefit the artist community? For this reason I think the museomix – organizers should assure the participants this won´t happen.

I hope these meetings lead to long-term collaborations between museums and artist organizations, which can deepen mutual trust and create deeper understanding about the needs and skills of both parties. Only our imagination is the limit for possible results.