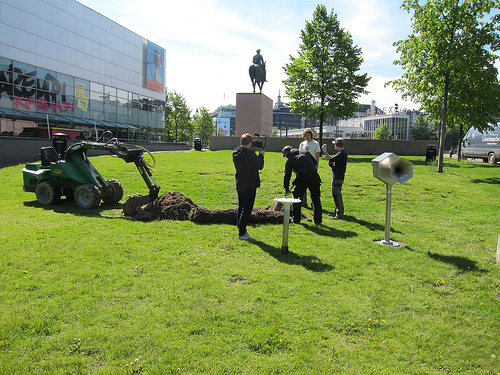 Megaphonebooth Kiasma-Nurmi by Unsworn Industries (SE)
02 June 2010, Nathalie Aubret
After being rejected successively from Narinkka Square, the Railway Station Square and Esplanadi, Megaphonebooth spent some time hanging around in the lobby of the Museum of Contemporary Art Kiasma, looking with envy at the grass on the other side of the back-window. At some point, it even thought that it would be sent back to Sweden without having set foot on Helsinki public space. But last monday, Megaphonebooth became Megaphonebooth Kiasma-Nurmi ('Megaphonebooth Kiasma-Lawn') and crossed over to the other side of the window. It's now beautifully standing on the Kiasma lawn until the end of June, in full possession of its powers, waiting for you, ready to help you say aloud whatever message it is you have to deliver to the world ! Go, shout it out!