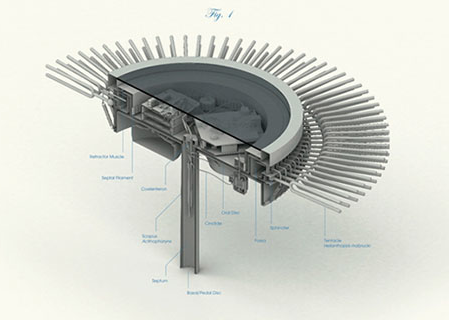 'Meeting Hybrid Entities' - Artist presentation by Felix Hardmood Beck on 19.10
11 October 2011, Nathalie Aubret
Aalto Media Factory hosts a meeting with Felix Hardmood Beck (DE), a media artist taking part in the Cartes Flux 2011 Festival with his interactive installation ‘Zoanthroid’. Felix will present a selection of media objects, technile organisms and kinetic sculptures that were developed either at the design studio ART+COM or as his personal art projects. The title of the presentation is Meeting Hybrid Entities.

(Media Factory is located in Arabia Center. Enter the building through the same entrance as Iittala Outlet shop, then take the stairs to the third floor corridor.)

The ‘Zoanthroid’ installation is on display as part of the Cartes Flux exhibition at Cable Factory (Valssaamo/Puristamo), in Helsinki, 18-23 October, 2011.

Zoanthroid is a kinetic object with origins in evolutionary biology and media technology. Its tuning-fork like tentacles are raised and lowered in organic movements to lull approaching prey. Zoanthroids feed on human admiration.

The skeleton and the external organs are formed by metallic, the internal organs by electronic parts. The body of the Zoanthroids have a cylindrical base shape, as seen with their biological relatives; Hexacorallia Zoantharia. Limbs and body parts are constructed bilaterally. As with other seanemones, Actinopharynx (leg, neck passage), Mesentery (chitterlings) and Siphonoglyph (dense ciliation around the oral disc) form the main features. The tuning fork-like cilia (lat. Helianthopsis Mabrucki; forked or branched tentacles) fulfill the purpose of communicating with their environment. In doing so, they are sensor and actuator in equal shares. And as sensor-like organisms with sensory-sensitive devising capabilities, distances to predators or breeding partners are perceived.

Felix Hardmood Beck was born in Düsseldorf, Germany in October 1978. He studied new media design at the University of La Laguna, Canary Islands, Spain and the University of the Arts Berlin, Germany, where he did his thesis in the form of a digital pilgrimage in the summer of 2007. In 2011, he completed his ‘Master Scholar’ under the patronage of Prof. Joachim Sauter. He works fulltime as an Art Director and Concept Designer for the Berlin based design studio ART+COM. As an artist, he works in Berlin and the Canary Islands. His work has been exhibited in Berlin (Germany), Vatnajökulsþjóðgarður (Iceland), Enschede (Holland), London (Great Britain), Istanbul (Turkey), Tokyo (Japan), Linz (Austria) and now in Helsinki (Finland).

ART+COM is a Berlin based studio for new media design, specialized in translating content into spatial environments using interactive media to create vivid experiences. Since the earliest days of the genre the company has been a pioneer of media design, art, technology, and research. Its projects range from interactive exhibits and installations to media façades, immersive scenographies and rooms.