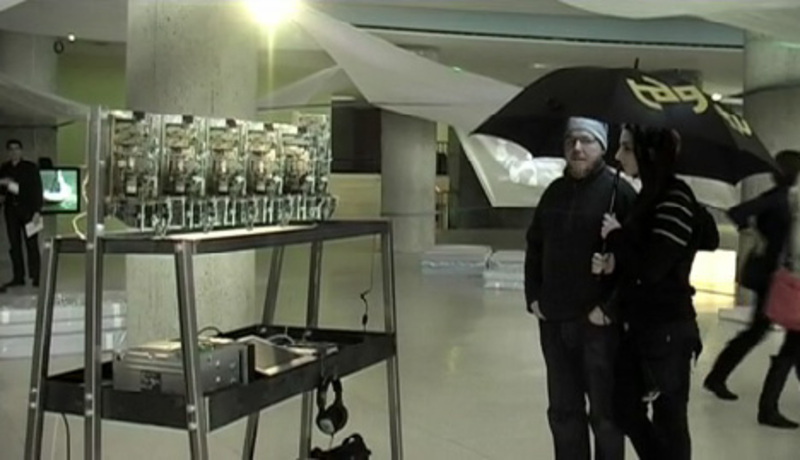 Deep South @ Deep North
08 February 2009,
The theme of this year's Transmediale Festival was DEEP NORTH, dealing with 'intense fragility and inherent instability of human interaction with global systems'. Surprisingly many works in the exhibition approached the theme very literally (ie. images and sounds of melting icebergs) but fortunately the Transmediale Salon discussions took more diverse approaches and were again my favourite part of Transmediale.

One of the topics under discussion was coltan mining in Congo. This precious metal (also known as tantalum) is today used in a wide range of consumer electronics - mobile phones, laptop computers, digital cameras, game consoles, etc. Most of the world's coltan resources are found in Congo and are currently being mined in areas where a confusing war in being fought. Some claim that the war is an ethnic one, some say that it's a conflict between fighting local gangs and warlords, some are accusing multi-national corporations for supporting the armed confict. What is certain is that millions of people have died, which makes this war the largest massacre after World War II. It's also clear that for a reason or another, the international media has almost completely ignored this conflict.

Transmediale had organised a live video link to Kinshasa where the MOWOSO collective was performing (MOWOSO was initiated by Eléonore Hellio and Dicoco Boketshu, last year's guests of Pixelache Signals from the South programme). Communication over a vast distance and over a great cultural gap was not easy, but fortunately we had Dominique Malaquais (a researcher who has been working in Congo for many years, and who knows the work of MOWOSO collective) in Berlin to help in understanding what was going on.

I would recommend for you to check out the video documentations of the Transmediale Salon discussions, once they become available. Meanwhile you can take a look at the interview of Graham Harwood, one of the creators of Tantalum Memorial (winner of this year's Transmediale Award).