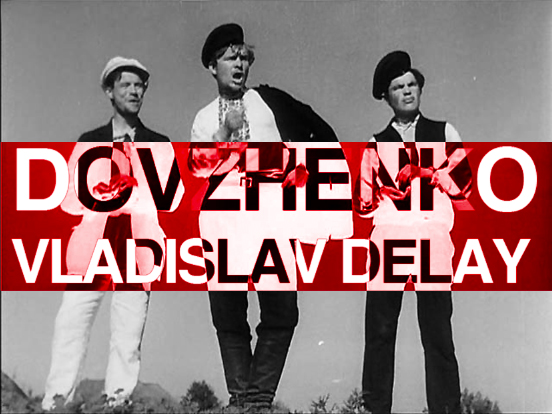 Celebrated as of the greatest silent films of all time, Aleksandr Dovzhenko’s lyrical Earth (Zemlya) is one of the quintessential Soviet films. Dovzhenko, cinema’s “poet of the Ukraine”, made this film in response to Eisenstein’s "The Old and the New" (Staroye i Novoye) and is the third part of his "Ukrainian Trilogy".

Dovzhenko, in Earth, was expressing his own view of “the old and the new.” (It is Godard who has said that the best way to criticize someone else’s film is to answer it with a film of your own.) Dovzhenko’s film is both national and urgent, and serenely transcendent. Selfish peasants—kulaks—resist collectivization; seeking to hold onto exclusive ownership of land, they oppose Nature by violating the bond of sympathy that weds individuals to the common good and to the earth. Nature is shown here as bountiful, ripe and nourishing, the source of moral truth, and an ennobling, humanizing force that the farm cooperative as a practical idea embodies. Nature also is the eternal witness in whose philosophic breadth and breath human mortality—the tragedy of life—unfolds. Whereas Eisenstein’s The Old and the New points proudly, confidently ahead, Dovzhenko’s Earth finds a solemn continuity—imaged forth by a vast ocean of waving wheat—threading past and present. (Dennis Grunes)

Vladislav Delay is one of the pseudonyms of Sasu Ripatti (born 1976), a Finnish electronic musician.
Sasu has been involved in the ambient music, glitch, house, and techno genres. His method of track production involves a mixture of synthesizing, vocal recording and live reprocessing. Many tracks have an organic feeling that pervades through rolling, dubby basslines and vocal snippets. His partner is Antye Greie, with whom he has collaborated.
Ripatti's music is renowned for its sophisticated textural qualities. His sonic approach relies heavily on a semi-random element, and many undulating, complementary and sometimes conflicting layers interplay throughout most of his music. A de-constructive element is sometimes detected within the music as Ripatti makes comment on established genres within his various releases.
He has released EPs and albums on labels such as Raster-Noton, Force Tracks, Chain Reaction, Mille Plateaux, Resopal, and Sigma Editions. He also founded the Finnish music label Huume Recordings.