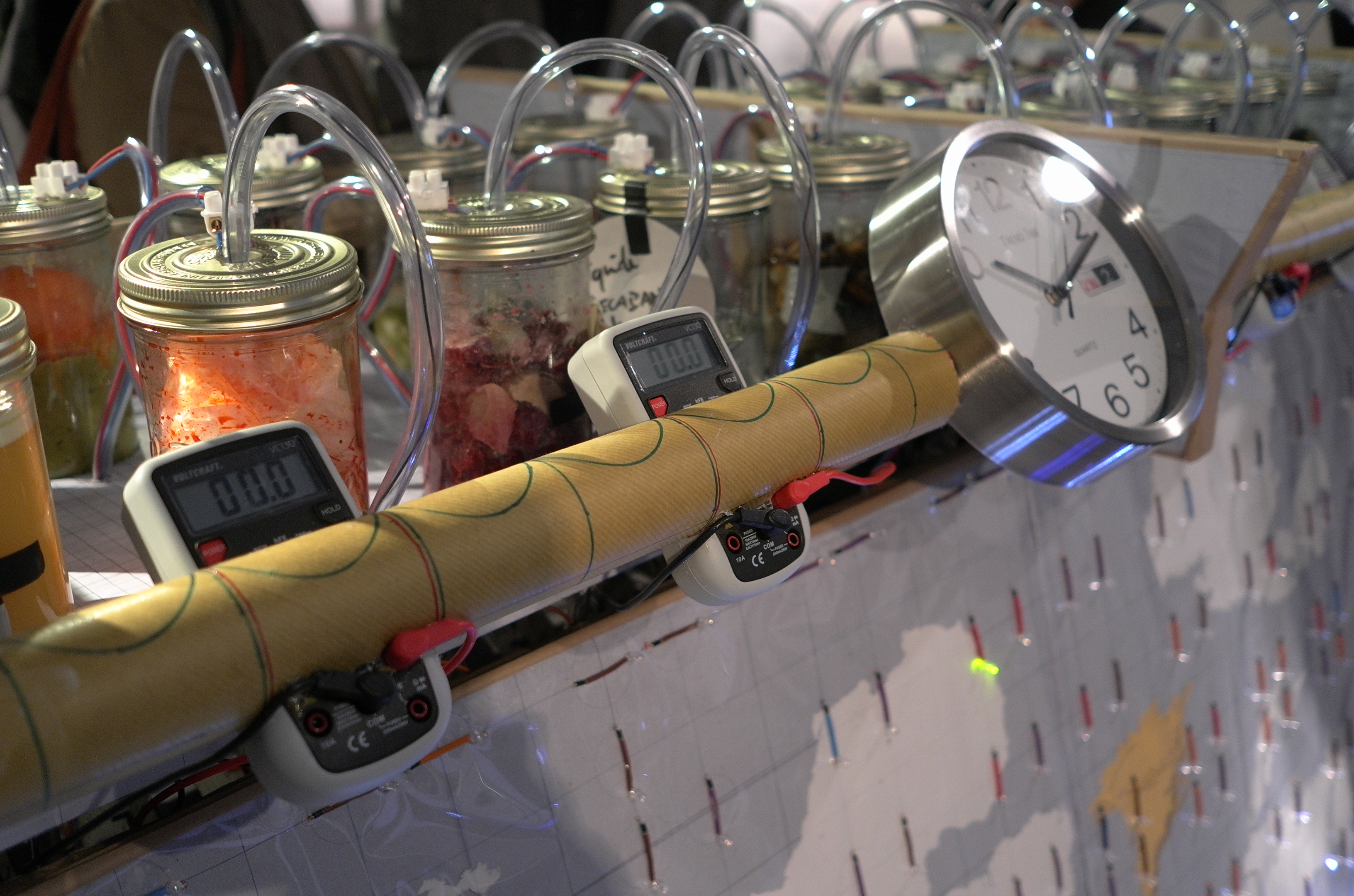 For the 4th edition of Signals from the South, a programme dedicated to art, media and technology projects from South America, Africa and Asia, Pixelache has the pleasure to present an exhibition by Jean Katambayi Mukendi (R.D. Congo). Jean will be in residence at HIAP in the Cable Factory during the first 2 weeks of March.

Signals from the South is organised by Pixelache, with support from the Finnish Ministry of Foreign Affairs and in cooperation withFondation Blachère (France), Gallery Myymälä2 and HIAP. 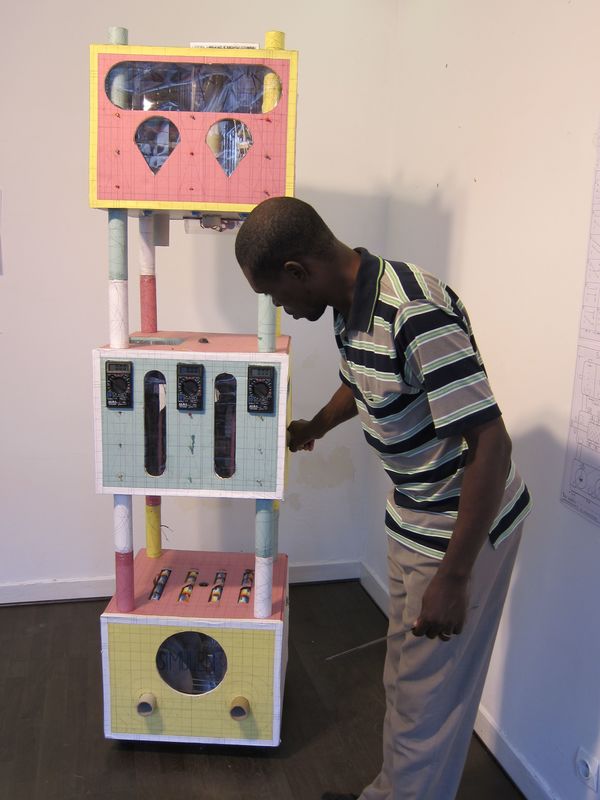 Simulen is an impressive machine whose shell is entirely made of paper and cardboard. It is a prototype for automatic correction of power distribution. At the heart of this piece is the daily reality of power cuts in Congo and the rest of Africa, resulting from the chaotic growth of urban infrastructures and the overload of anarchic connections to the electrical network. Often working late at night, Jean himself suffers a lot from this phenomenon and finds it very stressful. He noticed that after a power cut, the voltage over the wires is fluctuating over time. When electric home devices suddenly stop functioning, people often try to change the order of wires manually. This actually helps to make devices start working again, but it also very easily creates a short circuit, causing electrical shocks or the house to burn down in fire. While electricity systems have mostly become quite abstract in the North, in Africa people manipulate electricity with bare hands to correct failures in the diy style. If it doesn’t claim to solve the core of the problem that is political in the first place, Simulen is the prototype of a tool that would perhaps be the first one, to both visualise this phenomenon and teach common people how electricity works to protect them.

Jean realised Simulen in the context of his Afropixel residency at Ker-Thiossane in Dakar (Senegal) in 2010. 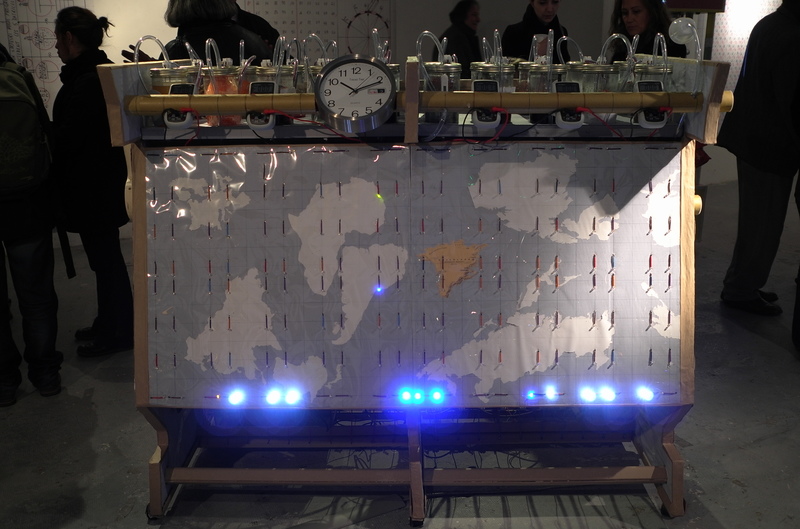 Ecoson is an artistic and electrical representation of the relationships between nature and technology within our ecosystem. It is a complex installation consisting of 20 glass jars filled with organic matter (inc. fruits, metal, cooked food etc.), connected to matrixes via plastic tubes and electrical wires, which virtually mix these ecoconductors (organic matter) with semiconductors (diods) in different combinations. All the connections between these natural and technological elements trigger different sounds, as well as light animations on a reshuffled world map.
Ecoson draws attention to the existence and to the influence of less obvious interactions within the global ecosystem, that should be explored further and taken into account in our effort to save the Earth. The behaviour of sound and light elements in the installation stand for all these more subtle parameters which are currently underestimated or ignored. In Jean’s opinion, the global ecosystem is kept together in a similar way as social relationships between people – both can last only if attention is given to subtle details.

Econergie is the contraction of the French words ‘économie’ and ‘énergie’ and refers to energy saving. It sets out to highlight the power of tiny elements, in this case a drop of water, on the production of energy. It is an illustration of the idea that huge sources of energy around us and can be activated and demultiplied with little effort, using the power of imagination. 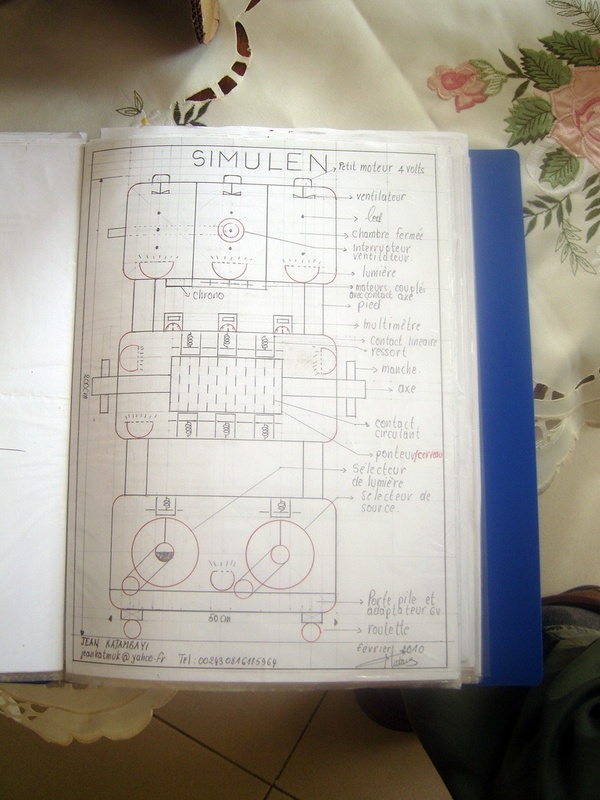 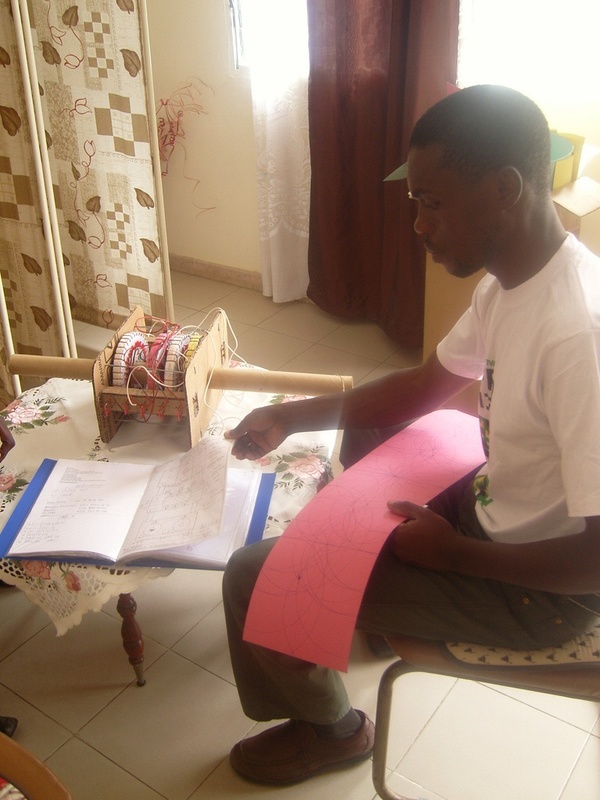 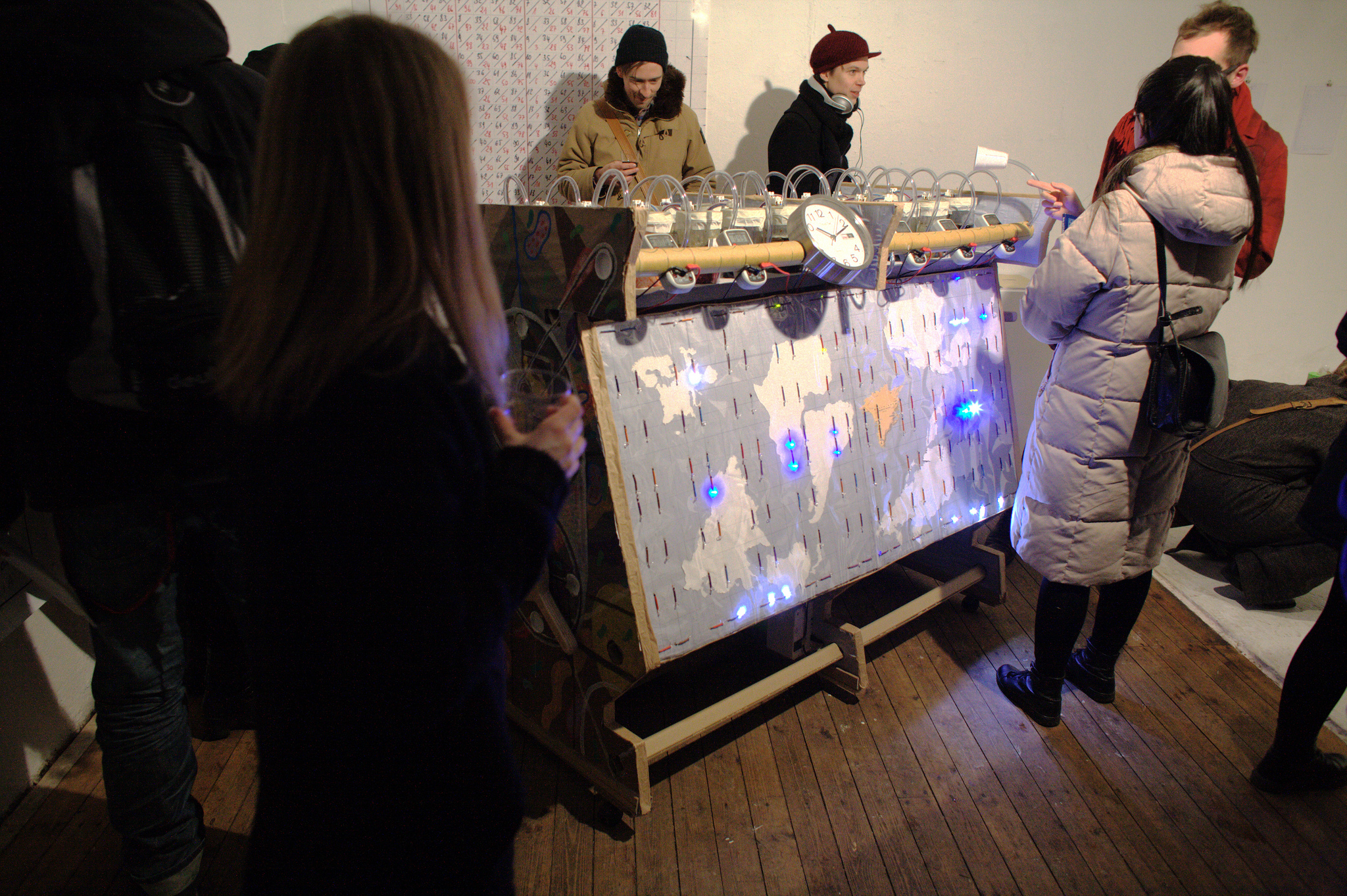 Signals from the South is an ongoing project of Pixelache that seeks to bring cultural projects (art, activitism and other) from‘the South’. In the past this project has focused onSouth America, Africa, Asia, and even Estonia, and has featured a wide variety of art exhibitions, installations, residencies and seminars.
Read more
Post: Signals from the South
Lens Politica festival is currently going on in Helsinki, featuring Self-organising in Latin America film program and much more... Meanwhile in Colombia - Erik Sandelin wrote a report from the first Pixelazo workshop in Medellin (the main Pixelazo event is coming up in June 2007)...
Read more
The Digital Ghost of Resistance Monument
Let's commemorate the Resistance Monument that was never realized in Coroa Vermelha, Brazil by creating a digital memory that is acceccible online! This call for open and collective project is part of Mikko Lipiäinen'sPatxohã Tech process.
Read more
Residency: Jean Katambayi Mukendi 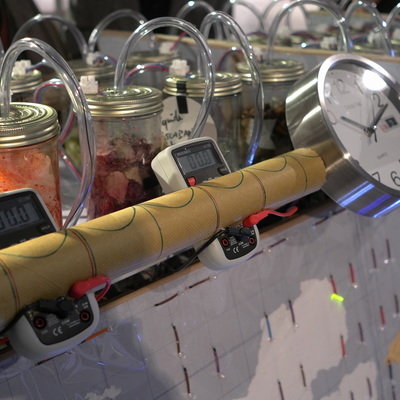 Jean Katambayi Mukendi was born in 1974 in Lubumbashi, the ‘Capital of copper’, in the South-East of the Democratic Republic of Congo, where he lives and works. Self-taught artist and scientist, he has a passion for logic, mechanics, geometry and above all electricity. Born to an electrician father and a mother working for a company in the metal extraction business, he was early on surrounded by all sorts of metals at home, which became an essential substance to his artistic work. Bricolage and the art of paper cutting were part of everyday life and Jean also soon discovered a passion for...
Read more