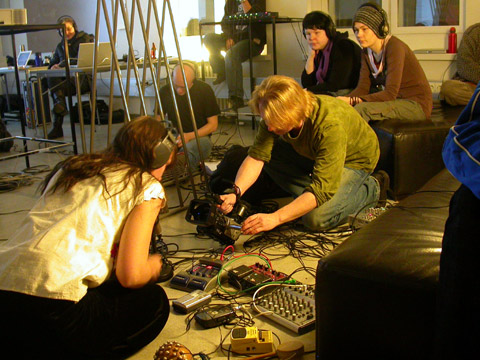 Placard #10 (France + international)
www.leplacard.org
'headphone concerts for headphone people'
Placard is a headphone concert festival, playing with concentration, intimacy, time warp and teleportation. It functions under a mode of open program, open for headphone rooms to create performance spaces where performers are welcomed to perform.

Since their inception in early 2003, UVA’s pioneering approach to performance creation, combining art direction, production and custom software development, has seen them work on a wide variety of projects in areas such as live band visuals (for Massive Attack, U2 and many others), site-specific installations (presented recently at Tate Modern and V&A Museum), music videos, fashion shows, live performance and permanent architectural installations.

At Pixelache 2007, UVA presents a series of sound interactives based on work developed for their live show, which has been touring the world for the last two years. For the first time the public has a chance to create their own unique audio-visual performance, using UVA's own bespoke software, D3.

The pieces reveal different areas of interest for UVA - from particle systems to flock simulation to realtime deformation of three dimensional objects. Users will be able to interact with the pieces by making sound themselves, or my manipulating a series of peripherals to produce the desired effect.

PARASITE: Parasite is an independant projection-system that can be attached to subways and other trains with suction pads. Using the speed of the train as parameter for the projected content, the projection starts with the train moving inside a tunnel. These tunnels bear something mystic - most people usually have never made a step inside any of those tunnels. Confusing the routine of your train-travelling-journey, your habits and perception the projections Parallel Worlds - making use of Parasite - allow you a glimpse into a different world full of surrealist imagery.

LIVING LETTERS: I have been experimenting with living matter in order to create slow media. One piece that has came out of it consists of four hypothetical 'living letters' as means of communication, especially between two individuals with emotional realtionship. To avoid hasty communication these letters demand more attention than common media does. Specific forms of interaction are required from these letters to get the message.