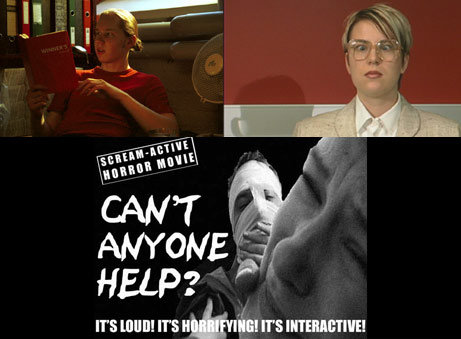 pixelACHE festival presens experimental movies from the interactive cinema makers in Helsinki. These movies make the audience a group of performers. They give audience a possibility for cheerful behavior and improvization. We present three movies - three different ways to give the viewers an active role in narratives.

"Can't anyone help?" presents you with the scariest interactive user experience... ever! Are you smart and loud enough to warn our hero and save the girl before they meet their gruesome destiny? This time it's all up to you!

In this horror movie parody two helpless characters are stuck on an island. They will not survive without help. Audience participation is a necessity. The audience interacts by using their own voice. By using an open interaction method this movie makes the audience a group of performers.

"Can't anyone help?" was made spring 2000 in the University of Art And Design Helsinki by Petri Kola, Markku Mastomäki and Minna Nurminen.

This interactive movie is about Mirjaleena, who is coming to job interview. The audience acts as interviewers and ultimately gets to deside if Mirjaleena is qualified for the job or not.

The production was made by media students of Helsinki Polytechnic, Stadia. "Mirjaleena on the Rack" was completed in few days during Interactive video course.

Elias wants to be a TV-star. He has met some interesting people who could help him. But Elias has no voice of his own. Someone has to play and speak for him. The story has many potential endings, depending on the player's approach and performance.

Sankari is an interactive game using video footage. The game can be played both on live TV or in movie theatres. It is played by one audience member talking to the characters on the screen while others watch the performance. The situation is similar to karaoke.

The game is produced in UIAH Media Lab. The consept is created by Minna Nurminen, Petri Kola and Mikko Lindholm.

The production group has members from different departments of University of Art and Design Helsinki and Helsinki Polytechnic Stadia. Makers of both traditional audiovisual narrative and interaction design are brought together.