a project by Helen Evans and Heiko Hansen (hehe.org)

Nuage Vert is part of the longterm art project Pollstream by Helen Evans and Heiko Hansen in collaboration with industrial and scientific partners. Pollstream speculates on aesthetic and contextual ways of materializing pollution in ways that alter our perception.

Is pollution something that is artificial, man made, something extra, which we add to the natural word? Or does pollution always exist, even in environments that are not interfered with by humans? And even if we consider the emissions, the waste and all the other “synthetic” overflows as not natural, they are still part of the same system. The entity from which we take and into which we stream back stays the same, in the words of Martin Creed: “the whole world + the work = the whole world”.

Pollstream is being materialised as a body of research, writings, project proposals and technology development. At the core of the project is the proposal Nuage Vert. This proposal suggests using industrial waste burning plants as a site for architectural installations, by utilising artificial vapour emissions as a canvas for information flow. The choice of information shown is related to the ecological activities of the local community, such as recycling or energy consumption.

Gas emissions have two sides to them: the visual and the chemical. These aspects impact differently on the individual depending upon their location and their situation. Nuage Vert is based one the first attribute, the visual impact. The visual appearance of the gas can lure us into an experience and is detached from the second possibly dangerous attribute, the chemical. Chemically speaking gas pollution is measured in Parts Per Million (ppm). In science this numeric approach spans usually from “normal saturation in office buildings” to “instantly lethal”. Pollstream should decipher these numbers and translate terms like “end-tidal breath” into collective experiences.

During the Pixelache residency the Pollstream research has addressed the two issues, the visual and the chemical. Nuage Vert has been developed in terms of project planning and it’s technical requirements. This process includes research on imaging and tracking technology, institutional and industrial partners have been approached for its realisation in Finland.

The research on the second attribute, the chemical has led to two new works, “Chambre d’air” and “Smoking room”. Chambre d’air is looking into the fluctuations of CO2 production in an enclosed environment in regards to the number of people in it. This process and its first installation has been developed in collaboration with Vaisala in Finland, a company which develops environmental and industrial monitoring sensors world wide. Smoking room is an installation that reacts to people smoking. The sensor for this installation has been developed by HEHE during the Pixelache residency. Both works are reflecting the discussions about gas emissions, ownership and responsibility.

Helen Evans (United Kingdom, 1972) & Heiko Hansen (Germany, 1970) design and build performing spaces. Using a language based on light, sound and image, their practice explores the interactive possibilities between individuals’ and their architectural and urban environment. Looking at a broad range of contexts, from public transport design, pollution monitoring, meteorology, public advertising, architecture to civil engineering, their work offers a critical, non-commercial reinterpretation of these systems, putting the spectator in the centre of the experience. Broad in their approach, they have been members of scientific research laboratories, taught graduate and undergraduate media design students and collaborated with other visual and performance artists.
www.hehe.org 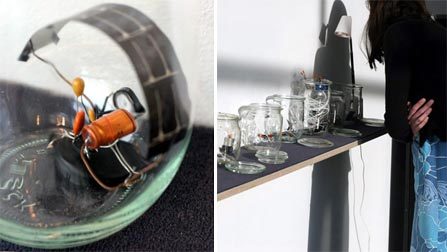 a project by Pascal Glissmann and Martina Höfflin at the acadamy of media art cologne, inspired by Ralf Schreiber and Mark Tilden

Robots still do not have the abilities, science and fiction promised us. Therefor our work is focused on very simple life approaching systems. ‘Elfs’ are small mechanical systems powered by solar energy that behave as natural living systems in many aspects. The immediate compassion for these life forms is an amazing experience, even though their abilities are very limited.

‘Elf‘ is a two-part installation developed in the context of the research project ‘electronic-life-forms‘ by Pascal Glissmann and Martina Höfflin. On one hand, the ‘elfs‘ are documented in their natural habitat, and the fading contrast of electronics and nature gives the scenario a surprising common impression. On the other hand, the imprisonment of these life forms in Weck-Preserving-Glasses reminds one of childhood adventures, exploring and discovering the world around us. The light-sensitive ‘elfs‘ desperately use their chaotic sounds and noisy movements to call the attention of the outside world.

Even though there is no general agreement for the definition of life, there is a cluster of properties connected to life: growth, reproduction, adaption, responsiveness, metabolism, movement. Sometimes autonomy, development, and evolution are also mentioned. In general, life is regarded as a complex biochemical machine. These ‘bio-machines’ have been available for studies af1 as carbon based life forms af1 for many years now, but at the same time researchers and artists always had a strong interest in simulating biological phenomena through the use of biochemistry, mechanics, robotics or computer models.

It started with simple captures of living organism in statues, drawings and paintings having movable body parts that needed human power to be activated. After further progresses like the early Egyptian water clocks, Clepsydra, based on the technology of water transport and the Pneumatics produced by Hero of Alexandria, the first more complicated forms of simulation have been developed in the age of mechanical clocks. Complex internal catenations made the simulation of life-like motion possible. Famous inventions like the Duck of Vaucanson and the Lady-musician of Pierre Jaquet-Drot (1774) followed and started a new direction of artificial life. The copies of nature became more and more complex leading to contemporary high-tech robots which simulate human senses and movements almost perfectly in certain aspects.

As we can see, one important push for building artificial life was the desire for machines that could help organizing the every day life more comfortable. Today these ‘support functions‘ of robots are very complex and only traceable by teams of experts and computer-based systems. Nevertheless the fascination of creating life is still present: not to realize basic functions but as the opportunity to communicate ideas of life and its philosophy in an artistic context. Our motivation is the enthusiasm of creating living things, observe their independent behaviors in lab and nature and peoples‘ reaction when they get in contact with simple life forms. In this case, art is technology. We do not rebuild organic creatures with the feeling of being forced to use ugly technology. We explored technology af1 especially small electronic components and its functions af1 which made us thinking of the ‘elf‘ project. It is fascinating to use very un-organic material, put it together in a way that it is still recognizable but adding some simple pure function that gives this living expression. The whole idea of this project is the exploration of technology and putting it in a new context/environment/perspective which questions the relationship between technology, nature and humans.

Pascal Glissmann, born 1973 in Germany, studied Communication Design at the University of Applied Sciences in Düsseldorf focusing on photography, typography and interaction design. After completing his MFA in audiovisual media at the Academy of Media Arts Cologne, gaining work experience in New York City and working as an Art Director in Germany he is now researching and teaching at the Academy of Media Arts Cologne.
www.subcologne.com

Martina Höfflin, born 1971 in Kenzingen, Germany, studied Computer Science at the Academy of Applied Sciences in Furtwangen and the San Francisco State University focusing on interaction design, usability and internet applications. After 2 years of freelancing as a media designer for different companies and customers in Berlin and Munich, she is now working in research at the Academy of Media Arts in Cologne since 2002. Besides she is cofounder of the Büro für Brauchbarkeit, a studio for media, art and fashion in Cologne.
www.brauchbarkeit.de