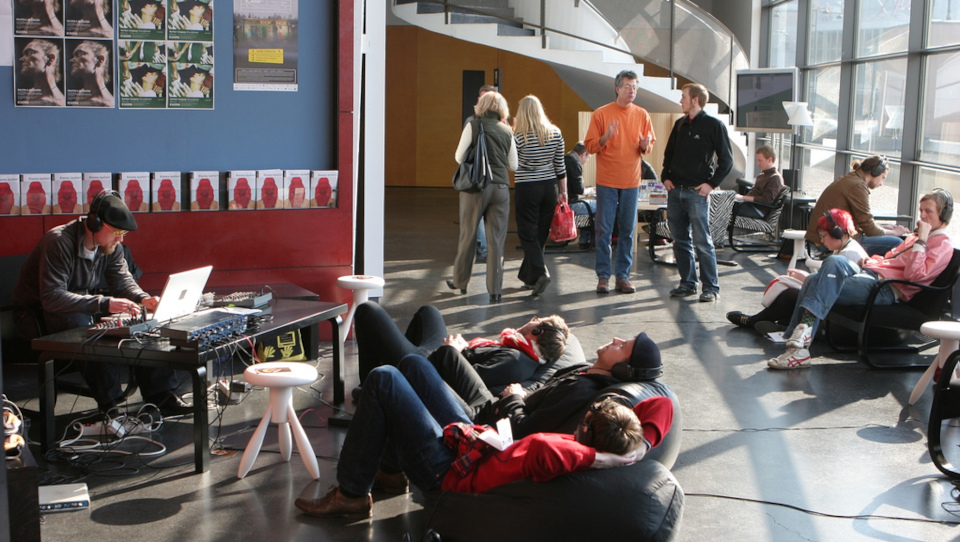 We invite locally-based & international speakers from first decade of Pixelache Festivals to present themselves & what's important to them nowadays, on Fri. 11th December 2020, 15.00-19.00 EEST. Join us online!! Our host will be New York -based independent curator Amanda McDonald Crowley. Register below!

Everybody is welcome to attend, where you are a current/former Pixelacher or a new face altogether! This event is open to all. (But please do register to get Zoom link in advance)

Focusing on 'The Kiasma Years' between 2003-2010, the individuals and collectives who have been involved in Pixelache in the 2000s, when we grew to have an international following and regular participation from abroad, may arguably be our ‘Elders'.

We plan and programme a public symposium on 11th December 2020, from 15:00-19:00 EET as an online gathering on Zoom*, hosted by New York-based independent curator Amanda McDonald Crowley (see short bio below). Those involved with Pixelache Helsinki Festival during 'The Kiasma Years' 2003-2010 were invited to reserve 5 mins to share what is important to theme in these contemporary days.

'Elders'. This is a little provocative label.. For a self-institutionalizing collective of persons, energies and associations, it is important to not just receive awards for ongoing practice (We were fortunate to receive Finnish National Art Prize in 2012) but to also self-judge when is an appropriate time to reflect and celebrate achievement within the ranks of the community, even a dynamic one. As a relatively flat, non-hierarchical, decentralised and dynamically democratic association, the ‘Gathering of the Elders’ is an occasion to celebrate where our early members and invited guests have ‘ended up’ after a decade or more of practice, entrepreneurship and research, where some are now in positions of authority and respect.

In anticipation of the 20-year anniversary of Pixelache Helsinki Festival action in 2022, and also 10 years public activity funding, we wish to use some resources this year, as part of our archival processes, to take stock of how the Festival and the association in general has fostered experimental practice, being an incubator and early showcase platform for innovation in cultural practice, experimental design and social-economic trends.

The event is also an opportunity to look back during those years, which may include some regret at some of the projects, reflecting privileges. Being self-critical as an organisation**: Did the line between making space for perspectives from other different geo-socio-political contexts, for example via Signals from the South programme (West, Central Africa; South America; South Asia), also slide into appropriating cultures? How does cultural invitation happen, what are the background stories? What affords a sustained connection across borders, in diversity and adversity? During the 'Kiasma Years' period, Pixelache Helsinki Festival was an internationally-orientated and out-reaching event, the majority of organising members and board were Finnish-born actors, while in more recent years of the association, this aspect has been flipped, where the majority of organising members are foreign-born.

This 'Gathering of Elders' is organised as the 1st event in a 3 or 4 part series related to #ArchivalTendencies, giving a chance to reflect on festival and organisational transitions over time; to make a public statement on the various 'Capitals' (Social, Cultural, Intellectual, Institutional, Financial) that Pixelache Helsinki spirit has been a crucible in forging and gathering. Our perspective might be idiosyncratic, specialised and narrow, but we believe our work has had impact in wider society, regional and international world, it just might not be obvious without a Gathering to emphasis the progressive agenda of many who have been involved.

Short bio about our invited host for the occasion:

Amanda McDonald Crowley is a cultural worker, curator, and educator. Amanda works at the intersection of art, science, and technology; and supports public art platforms that bring together professionals and amateurs from varied disciplines to generate dialogue and create space for audience engagement.

* We had hoped to make a hybrid event at Oodi Central Library in Helsinki, but according to new Helsinki City regulations starting 23.11., for at least the next 3 weeks, we can no longer host the event in presence, hence it is solely online via Zoom.