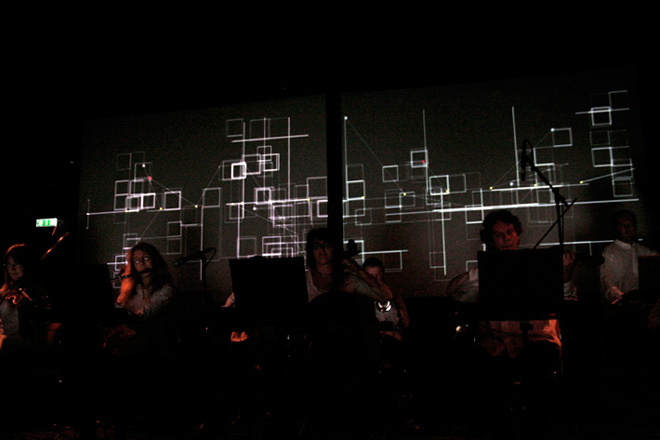 A music performance based on the electric signals generated by human muscles which were registered during a medical measurement of a human nervous system. 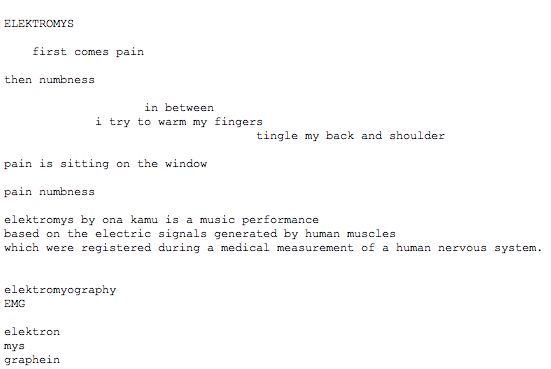 In Western culture we consider the heart to be the place for certain feelings. This is visable in language, with phrases like "to lose one's heart to" or "to lacerate the heart". The heartbeat also reflects the physical state of the body. It pumps heavily if the body is under physical tension, and when it starts to beat very fast it can indicate fear, stress or excitement. Slow beats show a state of relaxation or sleep Through meditation or biofeedback techniques one can manipulate these bodily states. The heart is a vital organ and for some it is the very place of life itself - a container of a metaphysical soul.

The musicians are equipped with ECG (electrocardiogram) sensors. A computer monitors and analyzes the state of these 12 hearts in real time. The acquired information is used to compose a musical score with the aid of computer software. It is a living score dependent on the state of the hearts. While the musicians are playing, their heartbeats influence and change the composition and vice versa. The musicians and the electronic composition are linked via the hearts in a circular motion, a feedback structure. The emerging music evolves entirely during the performance. The resulting music is the expression of this process and of an organism forming itself from the circular interplay of the individual musicians and the machine.

HCO is oriented toward traditional musical terminology but carries out a transformation with regard to content and form. The traditional chamber orchestra is a small orchestra of soloists without a conductor. TERMINALBEACH expand this concept by adding the role of the composer to it. The former interpreting musician, solely a hermeneut, becomes an actor by composing and interpreting at the same time. There is no pre-existing written score. The score is a temporary one and generated in the very moment of the heartbeats. Therefore a rehearsal, in the original sense of the word, is not possible. For the HCO, a rehearsal means learning to master the real time process.

HCO takes the idea of a traditional Symphony as a framework. Each of the four movements and their forms will illuminate the ongoing process from different sides. Imagery forms an integral part of the HCO. Computer graphics generated from the HCO data establish a different sensual and narrative layer. The interplay of audio and video allows for a synaesthetic experience for the audience. The heartbeats of the musicians and their relation to each other become audible and visible.

The Art of Implication

HCO is not a composition in the traditional sense. It draws its inspiration from music, art and science. This interdisciplinary approach pushes and questions the boundaries of the contemporary practice within these disciplines. The creative act does not create an object but implements a space of possibilities, a structure for processes to evolve. There is no clear distinction between author and interpreter, but the emergence of a reading/writing continuum with no territory for a single author.

The sensor network consists of 12 individual sensors; each one is fitted onto the body of a musician. A computer receives the heartbeat data. Software analyzes the data and generates via different algorithms the real-time musical score for the musicians, the electronic sounds and the computer graphic visualization

HCO is presented in a traditional concert space and setting. The orchestra is placed in the usual manner, but instead of a music stand, the musicians read the real-time score from a laptop screen. TERMINALBEACH and their computer equipment are placed within the auditorium. The concert space is augmented by 2 projection screens for computer-generated graphics and a suitable PA for electronic sounds. More information